WALKTHROUGH: Even the Sun Will Burn by Iska Dhaaf

WALKTHROUGH: Even the Sun Will Burn by Iska Dhaaf 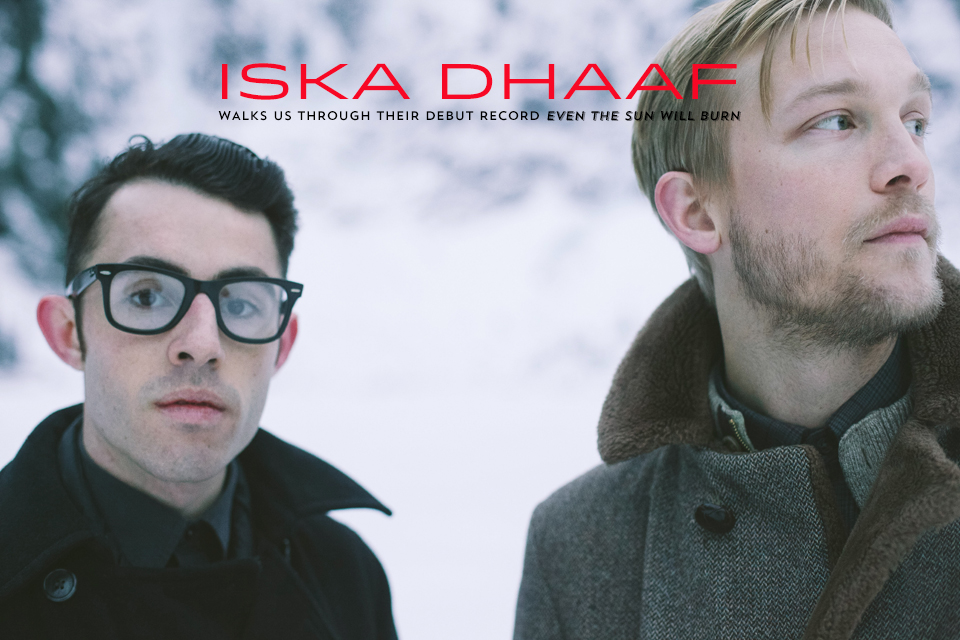 Iska Dhaaf is Nathan Quiroga and Benjamin Verdoes. Their band name is Somali meaning “let it go”, which gives you a perfect idea of the kind of music this duo makes. They’ve just released their debut record called Even the Sun Will Burn via Brick Lane Records that is both thrilling and intriguing with 12 songs of pure high energy pop-punk. Together, they deliver stories that are honest through simple but powerfully raw indie rock music that excites and affects. They’ve been getting a lot of love on the web especially after the release of their incredible music video for “Everybody Knows”, which features a bizarre Macklemore cameo. To give us an idea of what inspired some of the tracks in the album, we asked Nathan and Benjamin to pick their favorites and tell us the story behind them.

ALL THE KIDS: “The first stanza was sort of vomited out unconsciously. I had quit drinking at the time and was attending AA meetings. During this period of time I felt alienated from my friends and social outlets. I realized most of my relationships were built around the ritual of substance abuse. The more I changed the more alone I felt. This song is a memorial for a past self I had hoped to bury: a eulogy for friendships that died.” – Nathan

EVERYBODY KNOWS: “This song started as a few riffs that I had been working on and wanted to experiment with. I played the guitar part while Nate was playing drums. He ended up writing the melody for the verse while drumming. From there we switched back and forth between him and I playing drums and guitar and finished the rest of the song. We had a theme and feel early on for the words, but we struggled with the perspective and narrative switches. [symple_highlight color=”yellow”]We sent a lot of resource materials back and forth- everything from the Jarhead, to the book of Isaiah, to T.S. Eliot.[/symple_highlight] It turned out to be the apocalyptic vision of a soldier about to be deployed. I am glad that its social commentary doesn’t feel too pedantic or overreaching and that it’s pretty goddamned catchy.” – Benjamin

SAME INDIFFERENCE: “I started this the morning after a night of debauchery. I needed something to cleanse me. This song is a healer. [symple_highlight color=”yellow”]We play it every time we’re having an existential crises and feel like hiding.[/symple_highlight]” – Nathan

SULLEN EYES: “I put together the basic arrangement for this around the time we started the band. The line in chorus was something I would sing to myself often as I walked around making eye contact with vacant faces on the sidewalk and when I looked in the mirror. It addresses depression in the context of privilege. [symple_highlight color=”yellow”]I wanted the hook that was sunny and danceable and asked the same question that words do: why aren’t you happy?[/symple_highlight]” – Benjamin

EVEN THE SUN: “The first verse was for a friend who did too much blow and lost his soul. The second verse is about my girlfriend’s mother whom she took to rehab. The third verse was written the day my cousin Kenzie was released from prison who then relapsed and OD’d. [symple_highlight color=”yellow”]The last part, “Even the sun will burn itself out one day…” was written to console them, myself, and everyone else who struggles with living.[/symple_highlight]” – Nathan

You can buy Even The Sun Will Burn via Bandcamp. Follow them on Facebook. Press photo by Megumi Shauna Arai. Catch them live at The Church on York with Spencer Moody on April 13. Get your tickets HERE.

On Loop: “Leave a Trace” by CHVRCHES

On Loop: “Locomotive” by Birdforms