WALKTHROUGH: I Want To See You Dance EP by Avid Da...

WALKTHROUGH: I Want To See You Dance EP by Avid Dancer 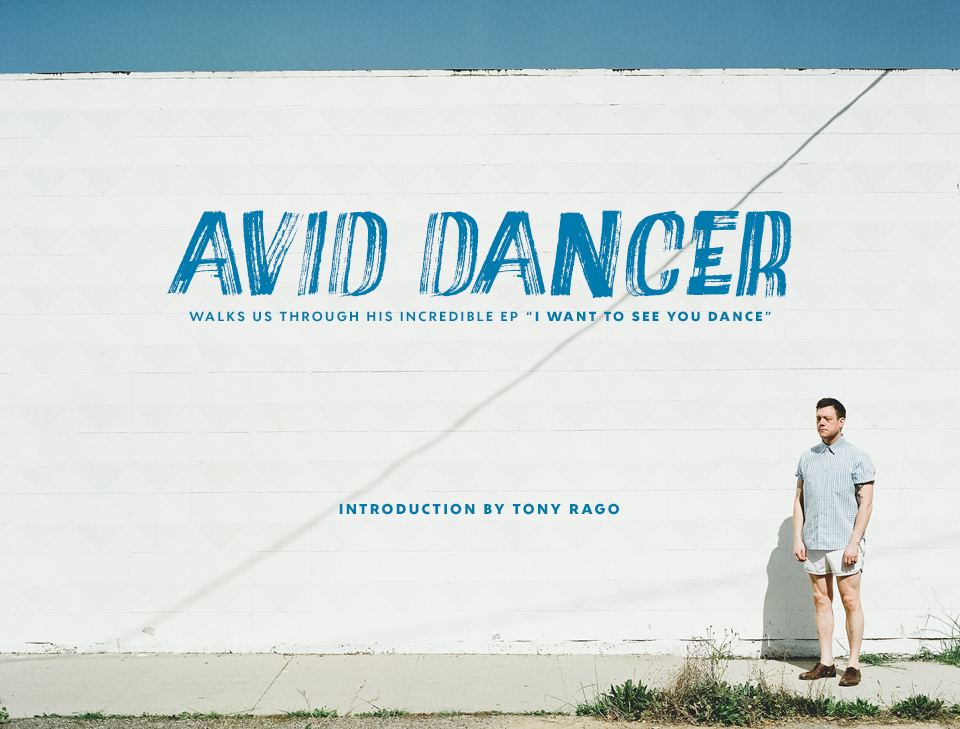 From the first note of Avid Dancer‘s I Want to See You Dance EP, it’s clear that Los Angeles-based Jacob Dillan Summers has crafted something special here. In four short tracks, he combines aspects of pop and psychedelic rock, and delivers a breezy indie gem. Perhaps it’s the fact that he was a former U.S. Marine that marches this EP forward with such precision, but it’s probably best if we let the man himself explain. His debut LP will be out in 2015 with a full band featuring members of Hanni El Khatib.

I WANT TO SEE YOU DANCE
“I wrote this song last year after a slump in writing. I hadn’t really felt like I had anything to say. Therefore, I wasn’t writing much. Except, I remember at the time specifically having the desire to write a song that someone could dance to. Maybe that sounds kinda weird. Usually I don’t have the intention to write about something, but that day I definitely did. I went to a show at The Wiltern that night, then stumbled into a bar on Hollywood Blvd. I remember watching a girl as she danced with a guy: her hair whipped across her face, not looking him in the eyes. I sat there watching, wondering what might be going on in her head as she danced for a total stranger. What she might be thinking about him, just another guy. I went home and immediately picked up a guitar and wrote this song in about five minutes.”

STOP PLAYING WITH MY HEART
“I recorded this song in a practice space in Echo Park, California that was being used by a band that I was drumming for at the time. I actually had no idea that I was going to write a song that day. I remember recording a slow groovy beat on my drum set, and recorded stabs in between certain sections to break up to groove a little. Then I sat down with my guitar player’s amp and guitar, turned up the reverb to 10, and started jamming over the top of the beat I’d laid down. I remember imagining sitting in a bar, looking across at the most beautiful woman, and tried to write out how I would “pick her up”. At first I thought the song was too simple, but when I sent it over to a few close friends for feedback, they overwhelmingly said I needed to take that demo into the studio!”

ALL THE OTHER GIRLS (DEMO)
“Although I wrote this song in Alaska a couple years ago, I recorded this demo in Venice Beach a few months ago after re-watching Kill Bill. In the final fight scene where Uma and Lucy Liu finally sword fight outside, there is a clap track and bass drum that starts to kick in just as they start to battle. I went in my bedroom and started recreating that vibe using several clap tracks, floor toms, shakers and tambourine, then recorded my lyrics over that beat. After the last chorus, I thought I’d have some fun with the outro and went into Garage Band to make a version of the song using all Garage Band instruments with a straight-up 2&4 dance beat. I ended up taking the entire acoustic instrument intro and slowly faded things in and out until the song completely changed its skin before the end. The song starts with all acoustic instruments recorded live, and ends with nothing but fake Garage Band instruments.”

MEDICATION (DEMO)
“This song is probably the most personal song I’ve ever written. I wrote this song about a time when I was feeling so down that I actually checked myself into the hospital because I was having some pretty dark thoughts about harming myself. I was there for 3 days and wrote out my experience in a journal while I was there. The lyrics specifically are about my first night there when the doctors told everyone in the wing to get in line to receive their medicine. I remember standing in line thinking of all the things I could do to prove that I was okay and didn’t need to be there anymore. I remember them asking us to get in line and thinking to myself, ‘someone please tell me how to keep in line, so I can get out of here’. I guess I’d better get ‘more medication’.”

You can buy I Want To See You Dance EP via iTunes or Amazon. Follow him on Facebook. Press photo by Cara Robbins. Catch him live at the Echoplex this Friday with Warpaint. Tickets are sold out.

Photos and review: tUnE-yArDs and Avid Dancer at the Santa Monica Pier 9/10/15

Catch Avid Dancer every Monday at The Echo for free this February!