Conversations: Sons of an Illustrious Father

Conversations: Sons of an Illustrious Father

Sitting in the back of a pick-up truck along Sunset Boulevard, munching on handfuls of tortilla chips and cracking jokes, Josh Aubin, Lilah Larson, and Ezra Miller could’ve been just a couple of twenty something’s outside The Roxy for a Monday night concert. Except that the reason the trio were eagerly shoveling down their salted snacks so quickly was because they needed to be onstage—opening for Grammy nominated musician Saul Williams in less than an hour.

Young and ragged; their humble, soft voices, which turn into roars of passion once onstage, are matched only by the intensity in their eyes. They’re an image picturesque of the struggle of a generation that is desperately trying to grow up and find meaning in a world molded by the mistakes, prejudices, and expectations of their parents. To some extent, this is what Sons of an Illustrious Father have come to slowly represent since their inception six years ago.

Their debut EP Sons was an inflammation of raw emotion that gushed from the songs’ genre-bending escalations from punk to funk—rock-‘n’-roll guitar riffs colliding with avant-garde lyricism. Haphazard and sporadic, pulsating with unfettered hunger and bold experimentalism, Sons of an Illustrious Father have made it clear that they are slaves to the emotive convulsions that have given birth to their music.

Speaking about their untitled LP, which is due out later this year, Aubin explained that genre and style have always come naturally, “I don’t think any of us really try to write a specific genre, but there’s definitely influences and musical tastes which adhere to us writing and forming songs in certain styles. But none of us really try to write a 90’s alt-rock song.”

“I think in approaching this album more specifically, it was much more about philosophical, political, spiritual cohesion than aesthetic restrictions,” Larson added. “All oppressions are intersecting—as many great theorists, activists, and humans in general have put forward. So, I think the fact that we are singing about colonialism and capitalism and sexuality and eco-feminism, is all inter-related.”

Howard Bilerman, a former member of Arcade Fire and highly decorated producer, is working on the record with the three musicians; a fact that Miller is still reeling from.

“We love Howard, so much. We’re really super thankful for the opportunity to have made this with him,” Miller explained emphatically.

Half-way through their support tour for Williams, impressions have already begun to take shape in the form of awe-inspiring admiration for the 42-year-old rapper and poet’s style of performance.

“I think that the way right now that he is testing and accessing the vault of his spontaneous creativity—he’s been doing these shows in such an experimental, spontaneous fashion—and I think that’s inspiring to see,” Miller said of their tour mate. “It’s a brave and cool thing to be able to do.”

As the sun began to set and the crowds started to roll-in, Larson reminisced about the last time they played in the City of Angels. “It was at a punk-house. Someone’s really busted garage on skid-row—it was rad as hell.”

We asked the band if they’d noticed any distinct personalities about Los Angeles crowds compared to other States: “I think you need at least three of anything to start observing patterns,” explained Miller.

When that third show does finally roll around and the trio has that freshman album under their belt, we look forward to seeing their names bumped up to the top slot of the marquee at a bigger venue. Yet, something tells us that we’ll still be able to find them sitting in the back of some pick-up truck, grubbing on fast-food, just before stepping onstage to play their hearts out of their chests and into our hands. 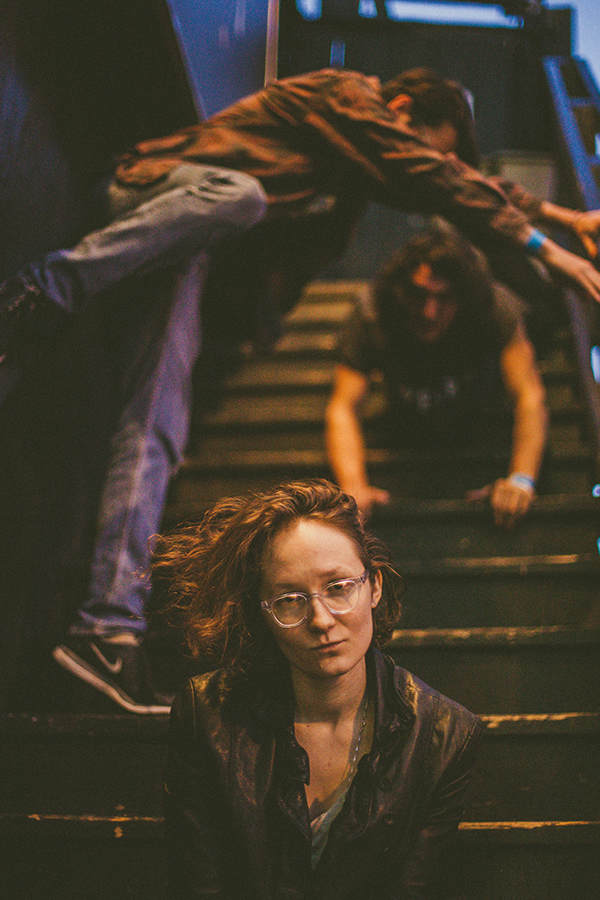 interviews, sons of an illustrious father

English major and amateur photographer. I'm the guy in the corner of the coffee shop plugged-in to Arcade Fire, typing away like a madman.